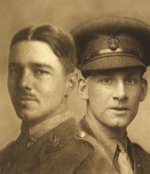 Facetiously penned poet Wilfred Owen MC, about to die just one week short of the Armistice in November 1918.

Wilfred Owen was sent to Craiglockhart Hospital for ‘Nervous Disorders’ in June 1917. There he met Siegfried Sassoon, an established poet, and gradually a relationship developed between the two which became not only a strong bond of affection but an inspiration for Owen to write his greatest poems.
This moving play follows their journey with a dramatic mixture of action, poetry and prose.

We are producing this play as a Commemoration of the 100th Anniversary of the Commencement of the ‘Great War’ in August 1914.