in the Studio & Theatre Upstairs 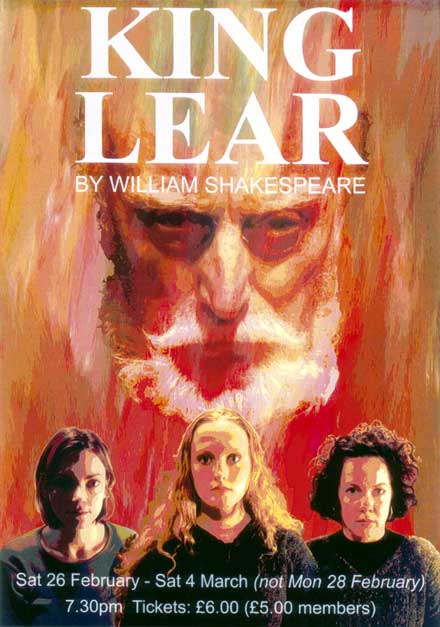 "Is this the promised end? Or image of that horror?" An eighty year old head of state disowns his youngest daughter and unleashes a storm which pulverises two families and rends the peace of an entire nation asunder. This epic examination of the ties which bind the end of one world and the stunned recognition of the need to build a new one.

King Lear is, by common consent, Shakespeare's most impressive work, his most powerful tragedy and the single one of his plays which speaks most eloquently to our historical moment.

One of the reasons is that a tragedy which tells the story of an old man trying to retain his dignity -- and indeed his sanity -- in a world he no longer understands and in which he no longer has any particular use or importance can hardly be said to be an archaic reminder of bad old times. The increasing breakdown of family life and the rising age of the population in the West means that, in one form or another, Lear's tragedy is still played out in virtually every street of the world. Lear's anguished question as he feels the world he knows slipping out of his grip -- "Who is it who can tell me who I am?" -- is, arguably, no easier to answer now than it was in 1606.

This production of Lear has been cut and rehearsed to allow for maximum accessibility. We have not adopted a particular 'line' on the play, but have tried to tell the story as Shakespeare wrote it, in a way which hopefully makes it meaningful for a modern audience. As with The Winter's Tale and Our Mutual Friend before, this production will be performed using both venues of the theatre: starting in the auditorium upstairs and moving downstairs for the second half of the play.