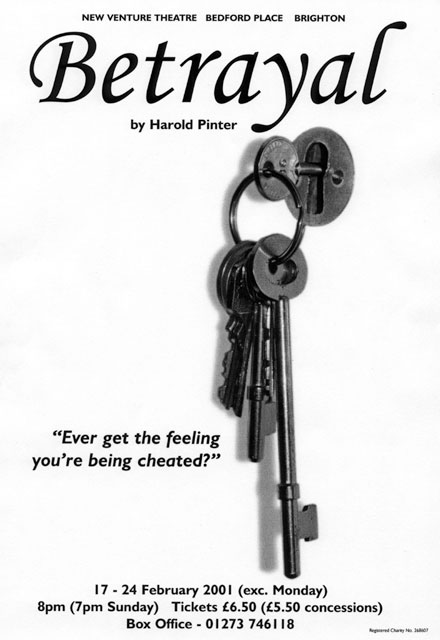 Time, they say, is a great healer. But does this only mean that we edit our memories in order to fashion a more comfortable version of them? In Betrayal, the story of the consequences of marital infidelity, the characters are not only betrayed by each other but also by time itself.

Widely perceived as Harold Pinter's most autobiographical play, this brooding comedy is in turn both accessible and engaging in the themes it covers.

The plot seems simple enough. Jerry and Robert have been the best of friends for many years. Emma, Robert's wife, has been Jerry's lover. The play starts two years after the clandestine affair has finished, with Emma meeting Jerry to tell him that she has revealed their past relationship to Robert. The last act of deceit is still to come.

The play's intriguing structure leads the audience from scene to scene thinking not 'What will happen next?' but 'How did this happen?'.

Jim Calderwood directs the experienced cast. Alexis Hills, who recently enjoyed success in "Death of A Salesman" and Risk" at the NVT, plays Emma. Bob Ryder makes a welcome return to the NVT after several years' absence to play Robert. Bruce Hazelton, an experienced actor/director making his NVT debut, takes on the role of Jerry, whilst Carl Boardman, star of "Cloud 9" and musical director of "Risk", appears as the waiter.

A fascinating piece, an accomplished cast, everyone has a view on Pinter - what's yours?