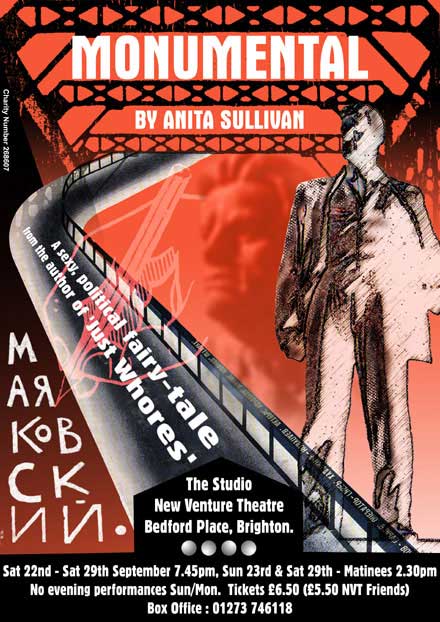 A sexy political fairytale. Winner of the 2001Tab Lab playwrights slam. Mel's father disappears on a business trip to Moscow. "Is he dead or alive: a hero or a gangster or just some greedy little man who messed up? I need to know!" Mel steals her mother's credit card and flies to Russia to find out. She is fifteen, alone and in danger. But in Moscow anything can happen and the statue of the revolutionary poet Vladimir Mayakovsky awakes to guide her through passions past and present.

THE STORY Mel's father disappears on a business trip to Moscow, so she steals her mother's credit-card and goes to find him. She is sixteen, alone and in danger. But in Moscow anything can happen, and Mel awakes the statue of revolutionary poet Vladimir Mayakovsky, who becomes her guide. An adventure begins. and perhaps a romance. as they explore the high-life and low-life, the past and present, of an extraordinary city. "You'd have to be a statue not to be moved" Scotland on Sunday.

THE WRITER Anita has written fourteen plays, all staged to wide acclaim throughout the UK. She's been commissioned by companies as diverse as The Traverse, Borderline, Eastern Angles, Pop-Up and the RSC. 'Sullivan's talent is remarkable' The Independent